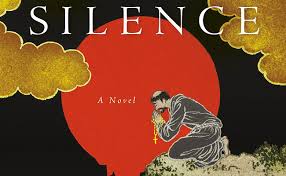 Shūsaku Endō’s Silence (1966) is the novel about 17th-century Jesuit missionaries to Japan on which Martin Scorsese’s movie Silence (2016)  is based.  The book’s central concerns are primarily theological, zeroing in on what true Christian faith looks like,  so I was intrigued to see the film’s overall favorable reception by some Christian as well as secular reviewers. Scorsese was quoted as saying that his movie was the culmination of a twenty-eight-year-old journey to bring the novel to life, and I expected some ponderous ruminations, albeit Hollywood-style, as a result. (Spoiler: After reading the book, I had no desire to see the movie.)

Most of all I didn’t want to fall victim to a knee-jerk reaction against it much as I and so many other Christians had with Scorsese’s The Last Temptation of Christ (1988), failing all the while to understand the underlying assumptions and questions it raised. After all, how can we Christians evangelize in a culture we don’t engage with, isolating ourselves instead of “being in the world and not of it”? (See my discussion of that in Where All Books Lead.)

So I read Endō’s Silence.  I wanted to consider Silence objectively without any preconceptions so as to understand this influential Hollywood director’s wrestlings with faith, however unlike my own wrestlings, because whatever questions he raised would be part of the cultural discussion in and out of the arts.

My curiosity about the novel was piqued particularly after reading Scorsese’s introduction to it, placing it on par with Georges Bernanos’s The Diary of a Country Priest (1936), a book from which I had come away with a renewed sense of the mystery and joy of the Christian life lived in utter submission to God, a life that outwardly (in a worldly sense) may seem to hold little reward but inwardly abounds in hope and love. In contrast, Endō’s Silence crushes the soul. The novel leaves you with a sick sense of futility, with faith likened to a slippery snake  called to “dwell in the swamp” of the hostile world and God all the while a distant and hard taskmaster who fails to justify his ways and reduces his devotees to justifying themselves in their defeat. The faith depicted in Endō’s novel finally honors not God but man as heroic in the face of God’s “silence,”  twisting apostasy and cultural compromise into a kind of saintly martyrdom. And that is its ultimate calumny and shame.

Endō’s Silence follows two Jesuit missionaries into hostile Japan during the 17th-century anti-Christian purges when authorities systematically tortured and executed thousands of believers. The novel begins with Portuguese priest Sebastian Rodrigues’s letters chronicling his determination not only to honor the church’s cause by ministering to the persecuted Japanese Christians but also to find out the truth of what had happened to his mentor, Cristóvão Ferreira, who is rumored to have apostatized under torture. Both Rodrigues and Ferreira, by the way, are based on actual historical figures. As the saintly Ferreira’s most devoted student, Rodrigues takes it personally that, until Ferreira’s apostasy, no missionary in Japan had renounced his faith in spite of crucifixions, burnings, water-torture and being hung upside down in a waste-filled pit. Rodrigues eventually reunites with Ferreira in Nagasaki only to discover to his shock and disgust that not only had the older priest apostatized but he was also collaborating with the military government. His betrayal is set alongside the steadfast faith and martyrdom of several Japanese Christians as well as the contemptible behavior of the Judas-like character, Kichijirō, who repeatedly betrays, repents, and betrays again family, friends, and community. Yet not long afterwards, after undergoing deprivation in a darkened room and being threatened with the pit himself, Rodrigues too in the end apostatizes and follows in his mentor’s footsteps, submitting to a native marriage and life in service to his Buddhist masters.

The central protagonist of the novel, of course, is God. Particularly, his silence. This silence makes itself known from the beginning as, when events turns grim, the priest Rodrigues resorts to fantasizing about the face of Christ, an image of which (the fumie) in the end he tramples with “dull, heavy pain.” Ironically, it is in this moment of apostasy that Rodrigues hears God’s silence broken, when “the Christ in bronze speaks to the priest: ‘Trample! Trample! I more than anyone know the pain in your foot. Trample! It was to be trampled on by men that I was born into this world. It was to share men’s pain that I carried my cross.” The military Lord of Chikugo and chief inquisitor, Inoue, questions the priest’s rationalizations. “You were defeated by the swamp of Japan,” Inoue says, adding, “You said to Ferreira that the Christ of the fumie told you to trample–and that was why you did so. But isn’t this just your self-deception?”

But such rationalizations are what the novel settles on in the end. The “swamp of Japan” is Endō’s metaphor to describe the indigenous culture that is inhospitable to western Christianity, this transplanted tree that “flourishes in one kind of soil [but] may wither if the soil is changed,” while making allowances for the culture’s systematic persecution of Christians.

The proof of this is that the God whom the peasants … secretly serve has gradually changed so as to be no longer like the Christian God at all. …The Christianity you brought to Japan has changed its form and has become a strange thing,” said the Lord of Chikugo as he heaved a a sigh from the depths of his bosom. “Japan is that kind of country; it can’t be helped.”

God’s “silence” is a manifestation of such rationalization and more. It becomes an indictment against Him for supposedly ignoring the suffering of those martyred, or those about to apostatize: “Lord, why are you silent? Why are you always silent…?” the priest asks. It leads him to sympathize with Judas, so that the last page of the novel twistedly invokes Judas as an anti-Christ whose betrayal was only in response to Christ’s command, Judas whom Rodrigues fancies suffered as he does in a corrupted definition of martyrdom.

The perverse characterization of faith that emerges is horrifying and is echoed in Scorsese’s foreword to Endō’s novel:

What was Judas’ role? What was expected of him by Christ? What is expected of him by us today? With the discovery of the Gospel of Judas these questions have become even more pressing. Endo looks at the problem of Judas more directly than any other artist I know. He understood that, in order for Christianity to live, to adapt itself to other cultures and historical moments, it needs not just the figure of Christ but the figure of Judas as well.

Cast aside the putative worth of Scorsese’s reference to the second-century “Gospel of Judas” written by gnostics as an alternate teaching of Christ to which only Judas was purportedly privy.  With the beatific representation of Judas as a hero of the stature of Christ that Christianity “needs,” Scorsese and Endō trample on more than a mere fumie. They trample on the true faith of Christians by glorifying the weakness and sinfulness of man at the expense of the glory of God.

Indeed, the translator of Silence, William Johnston, writes in the Preface that shortly after its publication, Endō’s book had caused “some indignation among the old Christians” in Nagasaki. A professor there in the Protestant Doshisha University wrote:

Obviously the belief of Ferreira and Inoue that Japan is a swamp which cannot absorb Christianity is not a reason for apostasy. It was because he lost his faith that Ferreira began to think this way … In that Christian era there were many Japanese who sincerely believed in Christ, and there are many who do so today. No Christian will believe that Christianity cannot take root in Japan. If the Japanese cannot understand Christianity, how has it been possible for Mr. Endō to write such a novel?

Compromising with the culture around us without honest repentance doesn’t make one a hero. But believing that it does may make Endō’s novel a work which, as Hollywood’s Scorsese writes, gives “a kind of sustenance that I have found in very few works of art.” God’s silence on this score must be very loud indeed.