In the spring of 1521, a man stood alone before an inquisitorial council, summoned by the Pope and Emperor Charles V, to renounce his writings and his beliefs. Instead, he stood firm, saying,

Unless I am convinced by the testimony of the Scriptures or by clear reason (for I do not trust either in the pope or in councils alone, since it is well known that they have often erred and contradicted themselves), I am bound by the Scriptures I have quoted and my conscience is captive to the Word of God. I cannot and will not recant anything, since it is neither safe nor right to go against conscience. May God help me. Amen.

Just days prior to his death many years later, this same man, Martin Luther, wrote that before the Holy Scriptures, “Wir sind alle Bettler” (“We are all beggars”).

We are all beggars. Newly clad in the righteousness of Christ, having discarded our sin-soaked garments, we stand with hands empty before our holy God to receive each day our fill of nourishing food from the table of Christ our King, a table laden with all that comes to us by the Spirit of God in the Bible. “How sweet are Your words to my taste!” writes the psalmist. “Yes, sweeter than honey to my mouth!” (119:103). “O taste and see that the LORD is good!” (Ps. 34:8) Through His word, Christ Jesus teaches and guides us, and by His Spirit enables us, so we shout with confidence with the apostle Paul, “I can do all things through Him who strengthens me!” (Phil. 4:13)

Prior to the coming of God’s kingdom through Jesus, the prophets too savored of His word. Theologian Scott Redd notes that Jeremiah, who first prophesied the New Covenant (31: 31-34), “drank deeply of the theological vintage of the book of Deuteronomy.” Was it in response to his soul’s hunger and thirst that Jeremiah came like us who are beggars before God’s word, his heart burdened with the knowledge that the old Shema (Deut. 6:4) recited day after day to remind him to love the LORD with his whole heart rung empty more often than not? And the LORD fed that hunger through His Spirit so that when God spoke, how ready he must have been to hear Him promise,

‘I will give them a heart to know Me, for I am the LORD; and they will be My people, and I will be their God, for they will return to Me with their whole heart.’  (Jer. 24:7)

A new heart!–instead of the one every man, woman and child is born with, “more deceitful than all else and … desperately sick” (Jer. 17:9).

The fundamental problem that faces us beggars is that we must till the ground of the stony law that Moses in Deuteronomy laid out so carefully, at the core of which are the Ten Commandments. But the crop that grew from that surface hardly bore fruit and the harvest hardly filled our hunger and thirst after righteousness, the righteousness that God demanded. The ground of the law was stony because the core of the law was love: love of God and love of neighbor. But how could deceitful and desperately wicked hearts till that ground? 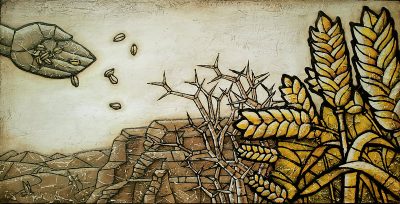 “A sower went out to sow his seed.” Jesus was talking to a crowd full of hungry people, hungry for righteousness in obedience to God, hungry for Jesus’s words, and Luke tells us that they had come from town after town to hear Him. He told them this parable:

“A sower went out to sow his seed. And as he sowed, some fell along the path and was trampled underfoot, and the birds of the air devoured it. And some fell on the rock, and as it grew up, it withered away, because it had no moisture. And some fell among thorns, and the thorns grew up with it and choked it. And some fell into good soil and grew and yielded a hundredfold.” (Luke 8: 4-8 ESV)

His disciples asked Jesus what the parable meant, and He replied, “The seed is the word of God.” He went on to say that the seed that fell on good soil are people “who, hearing the word, hold it fast in an honest and good heart, and bear fruit with patience” (8:15).

An honest and good heart. How many of the disciples felt their hearts tremble at those words, knowing their own sinfulness in the light of the law? In the Sermon on the Mount (Matt. 5-7), Jesus announced the coming of the kingdom, but the coming of the kingdom did not mean the law would be abolished as that would not “fulfill all righteousness” (3:15) which Jesus, the Son of God, was committed to doing. “Do not think that I came to abolish the Law or the Prophets; I did not come to abolish but to fulfill” (5:17). He goes further and says that the law wasn’t merely a matter of external deeds alone but of the inner disposition as well, a matter of the heart.

In effect, though, Jesus’s words fulfilled the law through His teaching.¹ The crowds of beggars like us fed on His words. His words were the words of an eternal king whose heart, unlike theirs, was pure. “You are already clean because of the word which I have spoken to you,” He tells them (Matt. 5:17), and again, as He had done time after time, He was announcing that the kingdom of God had come.  And they were invited to the feast.

He who brings the kingdom is the Sower who went out to sow the good seed.² And He is the Bread of life (John 6:35). He is the seed, the harvest, and the bread. His life, breaking into chronos time in that kairos³ moment, when God steps into human history and announces “the time has come” (Mark 1:15), is the moment the seed is planted: “In the beginning was the Word, and the Word was with God, and the Word was God…. And the Word became flesh, and dwelt among us, and we saw His glory, glory as of the only begotten from the Father, full of grace and truth.” (John 1:1, 14).

The Word that cleanses us by teaching us and by giving us new hearts into which He pours His Spirit to reveal to us the Bread of life, that Word gave Himself to usher in His kingdom and invite us beggars into His kingdom. “Truly, truly, I say to you, unless a grain of wheat falls into the earth and dies, it remains alone,” He said. “But if it dies, it bears much fruit” (John 12:24). The two greatest events in all of history were alluded to in those words: Christ’s death on the cross and His resurrection. With His death came forgiveness for our sins, and with His resurrection & ascension came the Holy Spirit down to us, poured into us like living water, to give us new birth, to cleanse and transform us from beggars into sons and daughters of the living God.

So are we beggars even more as children of God. For as we come to receive of the Bread of life (John 6:48), our hunger is greater, our thirst dearer; as the “deer pants for the water brooks, So my soul pants for You, O God” (Ps. 42:1). So to receive more and more of the Word of God, through the Scriptures and the Holy Spirit. So to die to ourselves. So to bear fruit. So to await our Lord’s return.

You prepare a table before me in the presence of my enemies;
You have anointed my head with oil;
My cup overflows.

Surely goodness and lovingkindness will follow me all the days of my life,
And I will dwell in the house of the LORD forever.

¹Herman N. Ridderbos, When the Time Had Fully Come (1957), p. 37
²Ridderbos, p. 16
³Used in the Biblical sense of the two Greek words for time, chronos/kairos, kairos being used by the New Testament writers to communicate the idea of God’s time, eternal reality breaking into the now.