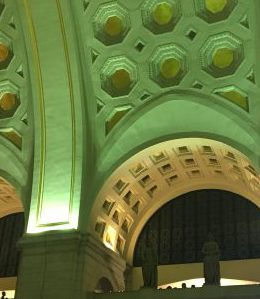 From under the milky sky we came breathing the rusting fumes of the day
Pumping its ready cocktails next to the George Washington bridge.
Just there a body had lain mugged in the night, a petty assassin
Pocketing a diamond ring and some change, leaving the rest
For the city to collect, the remains of a life unfulfilled.
A flag rose not two blocks down, the guard changed, a band played
And the cloaked world gazed with cataract eye upon a jaded crowd.

“Pray hard, for you are quite a sinner!” we heard a woman warn
And we smiled as she earnestly said, “Repent and turn to the LORD
Your God!” for we knew ourselves to be free from such psychoses
While we fingered our lattes and our lambskin leather jackets
That fed and hugged us securely in the warmth of the afternoon sun.
We would harbor no carrion illusions, only carefully accrued aesthetics
Like the discarded newspaper that fluttered past a Starbucks mezzanine.

Eight billionaires walked tandem across the town’s voracious buzz
Where the Fortune 500 list headlined and our pretended amusement masked
A desire for grandeur that rose above the street noises and hungry
Eyes for pristine security so hard, so stable, so fortressed
That diamond rings, dead bodies, bands, and pumpkin lattes
Faded into a reified realm of superabundance and satiety.
The earnest nameless, faceless woman continued her pleading
As we left descending the milky light of our Starbucks sanctuary.

One thought on “View From a D.C. Mezzanine”