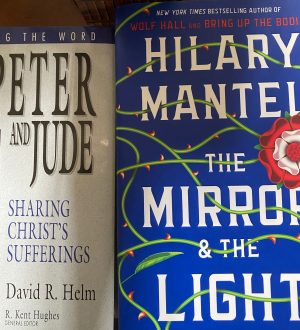 I’ve been reading David R. Helm’s Commentary¹ on Jude while finishing up Hilary Mantel’s Wolf Hall Trilogy. She’s a gifted writer is Mantel. Her incisive yet poetic imagination will send chills up your spine. And Helm unfolds his commentary with a literary feel that many theologians sadly lack.

I began the first book in Mantel’s trilogy just as the last book, The Mirror & the Light, was being released in March. It had taken Mantel more than fourteen years² of research and writing to complete what she now calls “the central project of my life”³: a project charting the rise and fall of the man Thomas Cromwell, best known for masterminding Henry VIII’s break with Rome and ushering in the Protestant Reformation in England.

Cromwell was a complex man whose history is a dark shroud relative to his contemporary’s, the gentleman-born Thomas More of whom much hagiographia exists. So to recover Cromwell, Mantel dug into the many records of his time preserved in libraries and royal court records. She also dug into her imagination to fill in the blanks of his early life working at the forge as a blacksmith’s boy in Putney to working as a clerk with the merchant bankers in Antwerp, before finally being mentored by Cardinal Wolsey who was himself the son of a butcher.

The trajectory of Cromwell’s life as a self-made man who rose to become Henry VIII’s right-hand man and the architect of Tudor policy reverberates to this day. But the rise from commoner to courtier was hard-won. And one thing that Mantel makes clear to the reader is that the past is ever at Cromwell’s elbow: the bellowing voice of his alcoholic father and the feel of his hard fist, the ditches and marshes and hardships of a runaway, the gaze of a dark-eyed lady in Antwerp, the capable steps of his beloved wife, Lizzie, who died of the plague and the disconcerting contradictions that were his two daughters (Anne and little Grace) who also died of the plague the very next year, Wolsey’s silk-clad presence replete in adroit political coups, counsels and strictures, all ghosts that walk the halls of Austin Friars, his London home.

Though the noblemen around him scorn it, he never forgets his history. Neither does Mantel let the reader forget: each line of Cromwell’s history is seen through his eyes and written solidly in the present tense. The reason is very purposeful. Our history would look very different for us now if not for Thomas Cromwell, our present altered past recognition.

During these current days of political and social unrest, one thing remains clear. We cannot have a clear understanding of the present if we don’t remember our history and what has shaped it. History can’t be ignored with impunity. It lies beneath us like unseen geological strata and walks among us peopled by ghosts from the past.

Many thousands of years have passed since Eve took the bite out of the apple but she’s close among us reminding us of that moment every day, the maelstrom of guilt, shame, and  judgment that was pronounced. Each time we bury a loved one, each time we sit by a bedside at a hospital, each time we read of disasters and wars, or see riots and fires and mobs in cities, the twin shades of Adam and Eve pass through our midst. They initiated the rebellion against the rule of God in our world.  We have been driven out of Eden with them. We have birthed our Cains, Abels, and Seths.

In his Commentary, Helm points out how conscious Jude is of history as he writes to churches under threat not only of persecution but false teachers. The admonitions and commands in the twenty-five verses that comprise the letter are laden with historical references to events and people, even angels, but not as if they remain in the past, but because they are witnesses to the present.

Much like the novelist Thomas Mann in his masterwork Joseph and His Brothers, Jude too, says Helm, is conscious that figures of history are never dead. They walk as “ancient archetypes” coming to life again, going by different names, working the same mischief, dooming themselves and others to destruction. They are warnings to us as well as examples. And they must be heeded because they are given to us for just that purpose in the scrolls and manuscripts and records on which they have been preserved.

After his greeting “to those who are called, beloved in God the Father and kept for Jesus Christ,” Jude says he found it necessary to write “appealing to you to contend for the faith” because “certain people have crept in unnoticed who long ago were designated for this condemnation, ungodly people, who pervert the grace of our God …” (Jude 1-4). “Long ago” is for Jude as “this” day, a past event and a present danger indicating the same downfall. And so he parades the ghosts of apostates before us, making no distinction between them and the current false teachers, declaiming, “Woe to them! For they walked in the way of Cain and abandoned themselves for the sake of gain in Balaam’s error and perished in Korah’s rebellion” (Jude 11), as if living apostates are the walking dead and damned.

Time, you see, condenses in the present. The dead are among the living.

History is that which has happened and that which goes on happening in time. But also it is the stratified record upon which we set our feet, the ground beneath us; and the deeper [we] go down into the layers that lie below and beyond … in our moments of less precision we may speak of them in the first person and as though they were part of our flesh-and-blood experience.
…
Deep-sunk in musing, yet mightily uplifted, was the soul of Jacob in these days when he with his brother Esau buried their father; for all past events stood up in him and became present again in his flesh according to the archetype; and to him it was as though the ground beneath his feet were transparent, consisting of crystal layers going down and down without any bottom and lighted up by lamps which burned between the layers. But he walked above them among the experiences of his proper flesh, Jacob, present in time, and gazed at Esau, who likewise walked again with him according to his archetype and was Edom, the Red.

Austin Friars was a small place once: twelve rooms when he first took the lease for himself and his clerks, for Lizzie and the girls, for Lizzie’s mother Mercy Prior. Mercy has now entered into her old age. She is the lady of the house, but she mostly keeps to her own part, a book open on her knees. She reminds him of an image of St. Barbara he saw once in Antwerp, a saint reading against the noise of a construction site, backed by scaffolding and raw brick. Everybody complains about builders, the time they take, the mounting expense, the noise and the dust, but he likes their banging and thudding, their songs and their chat, their shortcuts and secret lore. As a boy he was always climbing about on somebody’s roof, often without their knowledge. Show him a ladder and he was up it, seeking a longer view. But when he got up there, what could he see? Only Putney.
…
Now Austin Friars begins to shape like the house of a great man, its front lit by oriel windows, its small town garden expanding into orchards. He has bought up the parcels of land that adjoin it, some from the friars, and some from the Italian merchants who are his friends and live in this quarter. He owns the neighbourhood, and in his chests…he keeps the deeds that have divided, valued and named it. Here are his freedom and titles, the ancient seals and signatures witnessed of the dead, witnessed by city wardens and sergeants, by aldermen and sheriffs whose chains of office are melted for coin, whose corpses rest under stone. … History inks the skin: it writes on the hide of sheep long slaughtered, or calves who never breathed; the dead cut away the ground beneath us, so that when he descends a stair at Austin Friars, the tread falls away under his foot, and below him there is another stair, no longer visible except in the mind’s eye; and down it goes, to the city where the legions of Rome left their ashes beneath the earth, their glass in the soil, their bones in the river. And down it plunges and down, into the subsoil of himself, through France and Italy and the pays bas, through the lowlands and the quicksands, by the marshes and the meadows estuarine, through the floodplains of his dreams to where he wakes, shocked into a new day: the clang of the anvil from the smithy shakes the sunlight in a room where, a helpless child, he lies swaddled, startled from sleep, feeling as if for the first time the beat of his own heart.