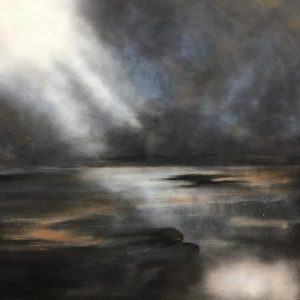 This ground underfoot, this riddling ground
Would you say you know it down to Adam and Eve,
Where lie its precipices, its canyons,
Where breathe the dragons that prey
On travelers at dusk and lost children?

I have walked on it with trepidation,
Fainting not, East of Eden, west of the moon,
Where the dead among the living
Like infernal winds sweep over the earth
Furies spitting on the destinies of men.

All around the wasteland where visions die
Banshees howl and half-formed men bay
Around fires of Cain’s wandering offspring.
Nevertheless, the eternal revelation, tri-folded,
Goes forth to the hungry and the poor in spirit.

The riddled ground beneath our feet,
Treacherous though it be, is as the dust of history
And we quickened ones like lilies of the field,
Dandelions harboring the unsearchable riches of Christ
To show forth the unassailable purpose of God.

Dumb to the world’s riddles, trusting, we carry on,
Until spinning out of bereft arms into shrouds
Or across canyons of a diseased mind
We lose each other to time’s grasp, till time stops,
And we, with joy unspeakable, everlasting, walk on new ground.

Ephesians 3: 8-12, Tyndale Bible (1522)
Vnto me the lest of all sayntes is this grace geven that I shuld preache amonge the gentyls the unsearchable ryches of Christ and to make all men se what the felyshippe of the mistery is which from the begynnynge of the worlde hath bene hid in God which made all thynges thorow Iesus Christ to the intent that now vnto the rulars and powers in heven myght be knowe by the congregacion the many folde wisdome of god accordinge to the eternall purpose which he purposed in Christ Iesu oure lorde by whom we are bolde to drawe nye in ye trust which we have by faith on him.