“Poetry makes nothing happen: it survives”¹
unlike young Icarus² who would fly to freedom
under the belly of a giant whale ascending
but he plummeting, free-falling, down to his death
while a world watched, still watches in horror
through that silver screen of the mind’s eye
as of an oracle that survives in the folds of memory
forecasting doom, like the poetry his heart sang
of a better life, a New World of winging hopes
now a land in chaos helmed by venal fools
where yet survive as in the Ark the few
whose hope shies not away
in whom Life supplants death
to whom Bread is provided and thirst quenched
whose city is built not with human hands
whose cornerstone is the Lamb that was slain.

2On Monday, August 16, 2021, seventeen-year-old Zaki Anwari fell to his death after clinging to a US military plane taking off from Kabul as he tried to flee the Taliban takeover. He was one of several Afghans who rushed onto the tarmac of the capital’s airport and desperately held onto to the side of the C-17 aircraft before takeoff, captured in a widely-shared video that encapsulated the chaos of America’s exit from Afghanistan. A member of Afghanistan’s National Youth Football Team, Anwari was described by a spokesman for the sports federation as “kind and patient. He had no hope and wanted a better life.”3 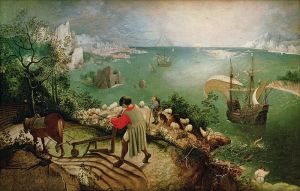 On a sunny day to feel so cold
or to be joyless in the moonlight
alone with demons that circulate in the air
like dust motes no one else can see
but the prisoner engulfed by placid Hades—”of suffering
the Old Masters were never wrong”—
agape in excess, empty of hope.

I cannot feel the sunlight’s burst or the moon’s
pale rays but this I know in my darkness:
enthroned on high in the heavens
my King reigns in whose power lie the visible
and invisible, Who holds sway over all,
yet undertakes to dwell with me
to deliver me from hell.