Here’s a retelling of the story of Job imagined in today’s context that will make your hair stand on end. For one thing, it’s not the way you would expect Job’s trials to go when instead of Job losing all he’s got, he gets all he wants. A tale retold, it may be, but make no mistake, it’s all strangely familiar. But not in the ways you may be expecting.

JOB: A FAIRY TALE OF GOD, SATAN, AND US
by K.D. Azariah-Kribbs

Once upon a time, there was a man called Job. And one day, Job bought a lottery ticket.

Now, Job did not do this thing because he was a lazy or a greedy man. Job simply felt, as many do, that he should be provided for without having to labor and earn his bread by the sweat of his brow when there are so many who have so much more than they need.

So Job slipped some money from his wife’s purse, and before she could ask him where he was bound, he let himself quietly out the door, went to the store at the corner, and bought the ticket.

And immediately and quite strangely, the simple act of buying the lottery ticket made Job feel that things were now somehow changed. Of course, he did not know whether he had won the lottery or not. But somehow, the sun seemed brighter and warmer when he came out of the store.

Now, at this same time, the Heavenly host had assembled to present themselves before the Throne of God, or at least all those were gathered there who cared to come.

For there are always those who, given the choice, prefer to remain in Hell.

And Satan, who at this time still occasionally appeared before the Throne of God, came to call. Satan always made sure he arrived late to these gatherings so that he could make something of a grand entrance. He ignored the angels standing to attention on either side of the great golden archway and pushed open the massive doors of living arcwood bound in black iron and strode before the Heavenly Hosts in a great dark cloud of sooty flame and sulph’rous black smoke, the brazen light of his entrance reflecting in wavering sheets of fire from the golden pillars beside him and backlit by the magnificent lapis lazuli sky far behind, for he knew the beauty of gold and fire set against deep blue and utter black, and in Hell he never got to display himself in such a way, for there is no sky in Hell.

Read the rest in Mysterion: Job: A Fairy Tale of God, Satan, and Us or via the author’s site.

What betrayals do we unwittingly commit in mistaking selfish desires for selfless love? Happy to recommend a newly published fairy tale, “The Three Sisters,” a wise meditation on men, women, and our expectations one of the other. As C. S. Lewis once said, “Sometimes fairy stories say best what needs to be said.” 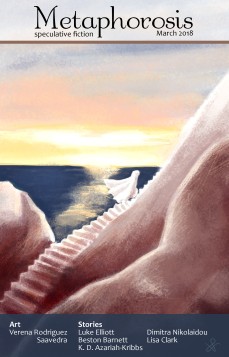 Once upon a time there were three brothers who lived with their parents in the midst of a vast forest. If there were any other people in the forest, they knew nothing of them, for they found no tra…